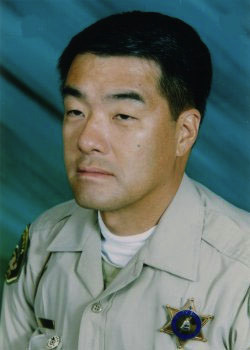 Deputy Bruce K. Lee was killed in the line of duty on May 13, 2003 while investigating a domestic dispute in La Quinta. His efforts at traffic enforcement, collision investigation, and law enforcement service to the City of La Quinta will be sorely missed. Deputy Lee was a resident of La Quinta and is mourned by his family, his friends and coworkers at the Riverside County Sheriff's Department and City of La Quinta, and the community he served.

Deputy Bruce K. Lee was assigned to the La Quinta Police Departments' Traffic Team. Deputy Lee was a 23 year veteran of the Riverside County Sheriff's Department and was also the regional coordinator for the county wide DUI program, "AVOID THE 30". He was assigned to investigate traffic collisions as well as enforce vehicle code violations.

Deputy Lee's specialty in traffic accident investigations was in the area of diagramming the collision scene. Deputy Lee had completed CAD (Computer Aided Design) courses in diagramming and had an extensive collection of computer generated diagrams covering areas in the City of La Quinta.

Deputy Lee was born and raised in Los Angeles and possessed an A.A. degree in Administration of Justice from West L.A. Jr. College. Deputy Lee was also a field-training officer and provided guidance to newly hired deputies.

Deputy Lee had a law enforcement background in uniform patrol, court services, traffic enforcement and traffic accident reconstruction. Deputy Lee began his career in law enforcement at the old Indio Station on Highway 111 (now a part of the Indio Jail) and was later transferred to the Palm Desert Station in 1991. In April 1992, he was assigned to work traffic enforcement and investigations in both the contract cities of Rancho Mirage and Palm Desert. In December 1998, he was transferred back to the Indio Station, where he had been assigned to the City of La Quinta.