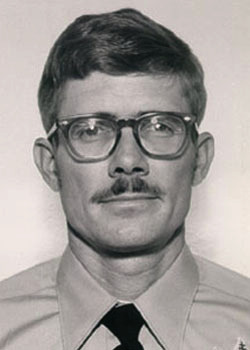 Deputy James Evans was employed with Riverside County Sheriff's Department four and a half years. He was hired on September 2, 1975, and assigned to Riverside Patrol.

Deputy Evans began his law enforcement career in 1974 as a Reserve Officer with Colton Police Department. He attended the Riverside Sheriff's 61st Basic Academy in the fall of 1975. In 1978, he received his Bachelor of Arts Degree from California Baptist College and his Intermediate Peace Officer's Certificate. Deputy Evans also received many citizen commendations for his services.

On May 9, 1980, five men dressed in Army fatigues robbed the Security Pacific Bank in Norco. The men were carrying automatic weapons. While fleeing with approximately $20,000 in cash, the suspects were being chased by local law enforcement agencies.

Towards the end of the auto pursuit, Deputy Evans became the lead car. Due to road conditions, the suspect car stopped. Deputy Evans was caught in crossfire and was killed.

The suspects fled on foot and a massive search for them was conducted through the night and into the next day. Three of the five suspects were captured. Two suspects were killed during the pursuit.