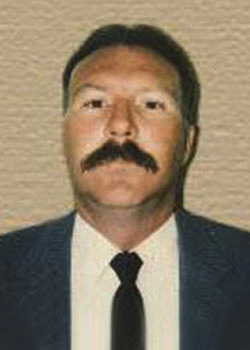 Deputy James Lehmann, Jr., was 41 years old when he was gunned down in the early morning darkness east of Cabazon on Sunday, January 5, 1997. He and his partner, Deputy Michael Haugen, were responding to a domestic disturbance at a mobile home in a rural area. Unbeknownst to the deputies, the armed suspect was waiting for them as they approached the location. He fired several rounds from a military rifle, mortally wounding both. The suspect later surrendered without incident.

Jim came to the Sheriff's Department in March of 1993, after working for the State Parks Department in Lake Elsinore. He leaves his wife, son and daughter. He was actively involved with his church, community and family.

He worked at the Robert Presley Detention Center prior to his assignment at the Banning Station.

Jim was a dedicated, hard working deputy remembered by his colleagues for his love of his career and family.