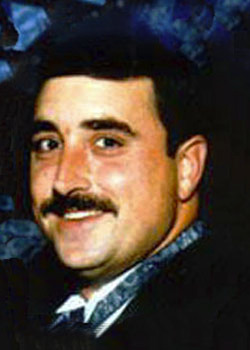 In the early morning hours of Sunday, January 5, 1997, Deputy Michael Haugen answered his last radio call. Dispatched to a domestic violence call east of Cabazon, he and his partner, Deputy James Lehmann, Jr., planned how to strategically approach the hostile situation. As they walked in the darkness towards the mobile home, they were gunned down without warning by the husband of the victim, who was lying in wait. Both were killed instantly.

Deputies arriving only moments later were unable to revive their comrades and took cover, not knowing if the gunman was still in the area. The killer was taken into custody without incident four hours later.

Mike died at the age of 33. He leaves behind his wife, son, daughter, and many friends.

Mike became a Deputy Sheriff in 1991 as a lateral hire from the Manhattan Beach Police Department. He worked at the Robert Presley Detention Center before transferring to the Banning Station. He was a hard working, caring person, devoted to his family and his chosen profession. He loved to fly and soar with eagles.

"I've topped the windswept heights with easy grace. Where never lark, or even eagle flew. And, while with silent, listing mind I've trod the high untrespassed sanctity of space, put out my hand and touched the face of God."