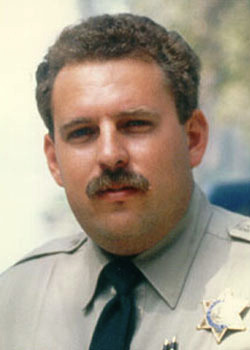 Deputy Randy Lutz was employed with Riverside County Sheriff's Department three years. He was hired on April 29, 1987, and assigned to Riverside Patrol. He was assigned to the Norco Motorcycle Patrol in June 1989.

Deputy Lutz attended the Police Reserve Academy at Fullerton College and received his POST certificate in June 1981. He began his law enforcement career in 1982 with the California State Police. In 1983, he joined the San Jacinto Police Department and in 1987, joined the Riverside County Sheriff's Department. In 1986, he was named Officer of the Year in San Jacinto. In 1988, Deputy Lutz was nominated for Peace Officer of the Year for his role in the aftermath of the gunshot wounding of a fellow Riverside Sheriff's Deputy. He played a major role in initiating the motorcycle program in Norco.